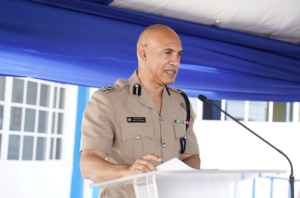 “I see 2022 as the beginning of a year of opportunities”, said Commissioner of Police Major General Antony Anderson at the JCF’s Annual Devotion at his Old Hope Road Office in Kingston on Monday, January 3.

Speaking on the theme ‘Tenacity, Transformation and Trust’, Major General Antony Anderson reflected on the challenges the JCF faced last year coupled with policing during the ongoing COVID-19 pandemic.

“It is our job to enforce laws and it is always in the best interest of the overall society,” said Major General Anderson. “That’s why we do it, that’s why the members of the JCF have been out there over the past year and have demonstrated tenacity in the face of COVID-19, in the face of financial constraints and in the face of the loss of a number of our members,” he continued.

According to the Commissioner of Police, in spite of these trials, the Constabulary achieved an overall 8% reduction in major crimes. He pledged the Force’s commitment to work harder and do things differently, even while maintaining strategies that bore success in some areas.

“This year we will come out harder in a more effective way; we will push against those people who wish to harm our population. That is the nature of tenacity…it is to lean forward into the wind and push, [because] just on the other side of that resistance is the success of our country and the safety of our people,” he said.

According to Major General Anderson, the JCF embarked on several transformation initiatives last year, and the organization is ready to forge ahead and strengthen these projects for improved service delivery.

“This transformation we are invested in is going to give us the capabilities to deliver better service to the country. I am confident that some of the things we started …will start to impact what we are doing this year,” said Major General Anderson.

Anderson made special mention of the largest ever JCF recruitment in 2021—over 1200 in one financial year.

“We won’t be sending five police officers to a division but 50—an amount that can make a difference to policing,” said Anderson.

Anderson ended his address with a charge to the members of the Force to be sensitive to the needs of the public they serve.

“We as the police force have to pay attention to the person seeking help for something that does not only involve violence and death but to other things that we are required to deliver. It is critical that our members—even when you’re tired, even when you’re fatigued, even when you’re faced with difficulties, treat every member of the public with respect and concern,” he said.