Deliveryman Charged with Killing of Father and Son

You are here: Home1 / Breaking News2 / Deliveryman Charged with Killing of Father and Son 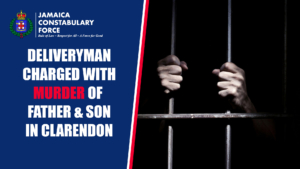 Twenty-nine-year-old Rohan Pitter, a deliveryman of Tavares Gardens, Kingston 11 has been charged with the April 2022 killing of a father and son in Hayesfield, Clarendon.

Reports are that about 7:45 p.m., James was inside his shop along with his son, when Pitter allegedly entered and opened gunfire hitting them. The police were summoned and they were taken to hospital. James Jnr was pronounced dead on arrival while James Snr succumbed to his injuries on Friday, June 17.

Pitter was subsequently arrested following intense investigations. He was pointed out during an identification parade, and charged following an interview.

Hanover Man Charged for Shooting at Cops
Scroll to top