You are here: Home1 / Breaking News2 / Hanover Man Charged for Shooting at Cops 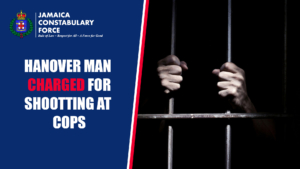 A man who was shot and injured, and a firearm taken from him during a confrontation with police in Orange Bay, Hanover on Sunday, August 07 has been charged.

Charged with Assault at Common-law, Shooting with Intent and Illegal Possession of Firearm and Ammunition is 21-year-old Marvin Facey, otherwise called ‘Prince’, of Santoy District, Hanover.

Reports are that about 9:45 p.m., Facey allegedly opened fire at a police team. During the gunfight, he was shot and injured and one Heyward Stream 9mm pistol with a magazine containing sixteen 9mm cartridges taken from him. He was taken to hospital for treatment.

Follow JCF!
Deliveryman Charged with Killing of Father and Son