Firearm and Ammunition Seized in Kingston 10

You are here: Home1 / Breaking News2 / Firearm and Ammunition Seized in Kingston 10 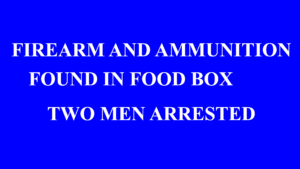 Police assigned to the Half Way Tree Police Station seized one Taurus 9mm pistol with a magazine containing twelve 9mm rounds of ammunition on Dumbarton Avenue, Kingston 10 on Thursday, June 02. Two men were taken into custody.

Reports are that at about 10:35 p.m., the team responded to an assignment and both men were seen standing beside a motorcar. They were acting in a manner that aroused the suspicion of the lawmen. They were subsequently accosted and searched; the vehicle was also searched and the firearm along with the ammunition found inside a KFC box on the back seat of the vehicle. They were consequently arrested.

The identities of the men are being withheld pending further investigations

Follow JCF!
Mother of 7-Year-Old Who Died Charged with Neglect

‘Baby face’ Charged with Illegal Possession of Firearm and Ammu...
Scroll to top