Firearm and Ammunition Seized in Kingston 8, Three in Custody

You are here: Home1 / Breaking News2 / Firearm and Ammunition Seized in Kingston 8, Three in Custody 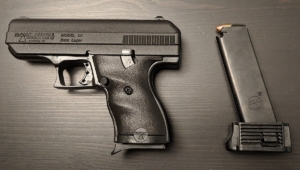 A team of officers assigned to the St. Andrew North Police Division seized a Browning 9mm pistol with a magazine containing thirteen 9mm rounds of ammunition during an operation on Fagan Avenue, Grants Pen in Kingston 8 on Monday, November 1.

Three men were taken into custody in relation to this seizure.

Reports from the Constant Spring Police are that about 5:30 p.m., lawmen were in the area when they saw three men. On seeing the police, one of the men reportedly dropped a bag he was carrying. The men were accosted and the bag was retrieved. Upon closer examination, the illegal firearm and ammunition were seen inside of the bag.