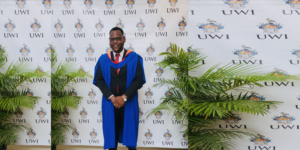 Police Corporal Kensley Shay is one of four remarkable valedictorians for the University of the West Indies (UWI), Mona Campus’ virtual graduation ceremonies scheduled for this weekend. Dubbed the “Fantastic Four”, the students have excelled in their various fields and will represent their peers for the graduating class of 2021. The valedictorians include students from three faculties, with Corporal Shay representing the Faculty of Social Sciences.

Shay, a St. Thomas native, did the Jamaica Constabulary Force (JCF) entrance test at the age of 16. “Someone convinced me to do the test when I was in the lower sixth form. I had no interest initially but I soon realised that it was a great way to push myself into adulthood and become responsible,” Shay explained. At that time University was not an option for him due to financial constraints. He successfully joined the JCF at nineteen years old, and has served with distinction in the St. Andrew South Division and the Protective Services Division.

As Shay continues to break the proverbial glass ceiling, he shared a word of encouragement for young people who want more out of life. “Personal experience has allowed me to understand that our paths in life aren’t labelled with clear directions in regards to which way we should be headed,” he stated, while reflecting on his earlier life.

He also shared that he applied for UWI and the University of Technology every year just in case he was able to start in one of those years. “You have to keep your head up during every phase in

His pursuit of a Bachelor of Science in Management Studies was not without its challenges. “The programme was pretty good, I had fun with it. However, being able to sync my academic and professional life was my greatest challenge.”

Despite this, he not only excelled at school, but within the Constabulary. In December of 2018, he studied for and passed the JCF Promotional Examination, earning his promotion from the rank of Constable to Corporal. This promotion gained him more responsibilities at work, which he juggled well while maintaining a high grade point average (GPA).

Giving a peek into his valedictory address, Shay shared that his speech will play on the justice system, citing his enrolment as an ‘arrest’ and his graduation as an ‘acquittal’.

When asked about his biggest inspiration Shay credited his mother. “My mother’s words keep me calm and her prayers keep me safe!” he exclaimed.

The outstanding police officer hopes to complete a fully funded Masters of Arts degree in Intelligence and International Security or a Master’s of Science in Information Systems or a Computer-Based programme. He has already applied to several prestigious universities and is in high spirits about his prospect.

There are no limits on Shay now. The JCF salutes Corporal Kensley Shay on his resolute focus on his academic pursuit and representing what it means to be a ‘Force for Good.’

Firearm and Ammunition Seized in Kingston 8, Three in Custody
Scroll to top