Firearm and Ammunition Seized in Manchester/ Man in Custody

You are here: Home1 / Breaking News2 / Firearm and Ammunition Seized in Manchester/ Man in Custody 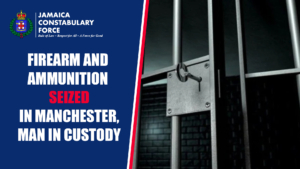 A team of officers assigned to the Manchester Police Division arrested one man following the seizure of an illegal firearm and six rounds of ammunition during an operation in Clarks Town district, Porus, Manchester on Tuesday, September 27.

Reports from the Porus Police are that about 3:10 p.m., lawmen were on duty, when they saw a group of men at a garage. It is alleged that on seeing the police, one of the men took a bag from around his neck and threw it behind a plastic tank. The bag was retrieved by the police and a search of it revealed one .38 revolver pistol containing six .38 rounds of ammunition.

The man was subsequently taken into custody; however his identity is being withheld pending further investigations.