Quick Response of Cops in St. Elizabeth Lead to Arrest of Goat Thieves

You are here: Home1 / Breaking News2 / Quick Response of Cops in St. Elizabeth Lead to Arrest of Goat Thieves 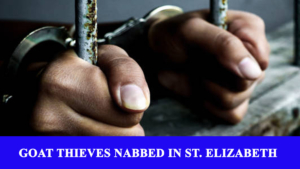 The St. Elizabeth Police charged four men for breaches of the Larceny Act after two farmers in the parish reported their goats stolen on Monday, April 4.

Charged with Larceny Goats and Receiving Stolen Property are:

Reports are that between 5:30 p.m. on Sunday, April 3 and 4:00 a.m. on Monday, April 4, the farmers – one in Pedro Plains and the other in Greenfield District, both in St. Elizabeth – discovered that their goats were missing.

Reports were made to the police and an hour later, investigations led the team to Parottee District in the parish where the total of eight goats were found. The goats which have an estimated street value of JMD 255,000 were identified by their respective owners.

The men were subsequently charged and are to appear in the St. Elizabeth Parish Court on Monday, May 11.