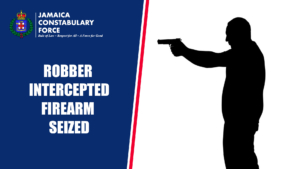 A police team on patrol on Tower Street, Kingston intercepted a robber minutes after he committed a robbery, and seized a firearm on Monday, August 15. The man has since been charged with Robbery with Aggravation and Illegal Possession of Firearm and Ammunition.

Reports from the Central Police are that about 5:45 a.m., Sinclair boarded a Toyota Probox, that was being operated as a taxi. He allegedly robbed a female passenger, along with the driver, of their cellular phones. The driver was then tied up and left along the roadway. The female passenger escaped unhurt.

Sinclair drove off in the taxi, along Tower Street, disobeying the one way road sign. A police team in the area signalled him to stop, however he sped off and crashed into a wall at the intersection of West and Tower Streets. He was accosted and one Smith and Wesson 9mm pistol along with six 9mm rounds of ammunition taken from him.