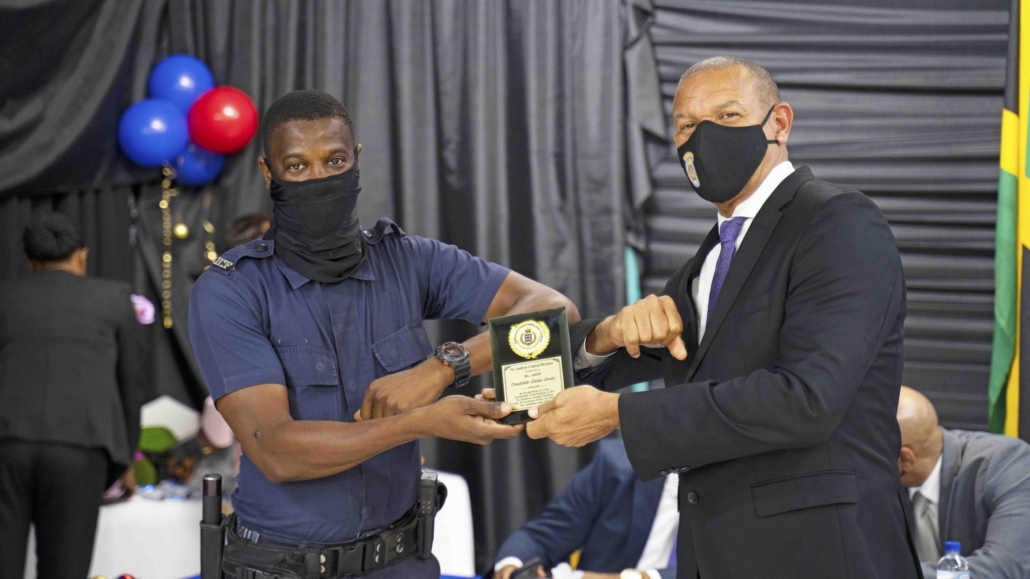 Constable Lairie Lewis receiving the award for most firearm seizures

The Management of the St. Andrew Central (SAC) Police Division showed their appreciation for the Team’s contribution to safety and security services provided to the public, during a recognition and awards ceremony held at the Police Officers’ Club on Wednesday, December 15.

The management team led by Senior Superintendent (SSP) Marlon Nesbeth presented awards to personnel across the Division to highlight outstanding work in service delivery and operational successes. SSP Nesbeth stated that “it is important to honour the members to include retirees,” as they continue to extend themselves in ‘service above self, even in this pandemic. He further stated that there may be other members who deserve an accolade and not yet formally awarded, he however thank them, making special mention of the frontline members for continuing to display the highest level of professionalism and service to the public.

“I congratulate Team SAC, for the efforts and performance in crime management and encourage you to give of your best always to the public you serve,” said Assistant Commissioner of Police (ACP) in charge of Area 4, Donovan Graham. ACP Graham was making reference to the reduction in major crime in the Division. St. Andrew Central has recorded an over 18% reduction in major crimes and over 17% reduction in murders since the start of 2021, in comparison to the corresponding period last year. 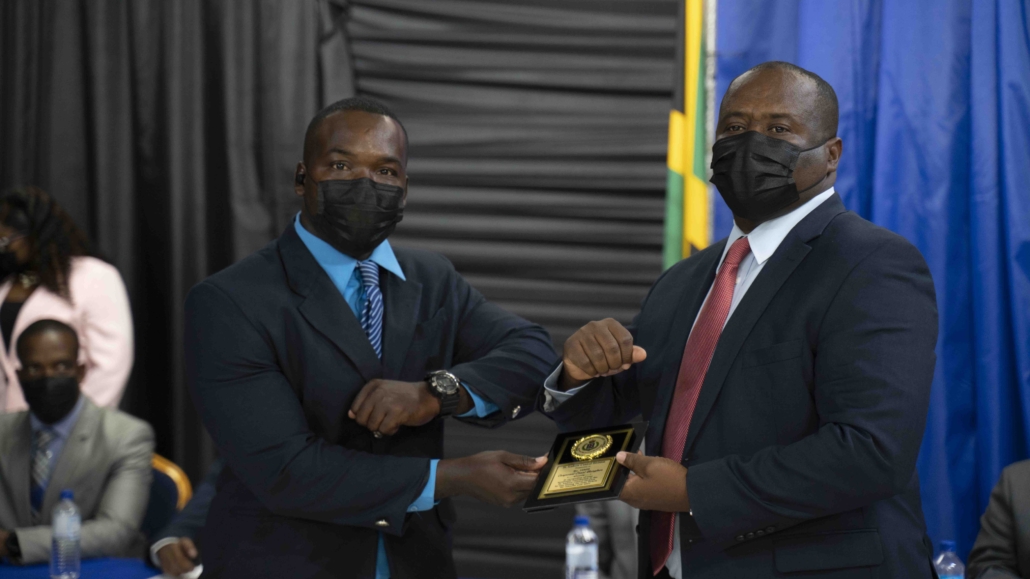 Among the awardees was 33 years veteran in the police service, Sergeant Derrick Williams who is assigned to the August Town Police Station. Sergeant Williams was presented with an award for being the officer who made the most arrests – a whopping 115 – in the division. Sergeant Williams said, “I go to work daily with an open mind as my duties vary from ZOSO commander to patrol driver…I feel justified that after so many years, the management team recognized my work and I am very appreciative of it.” 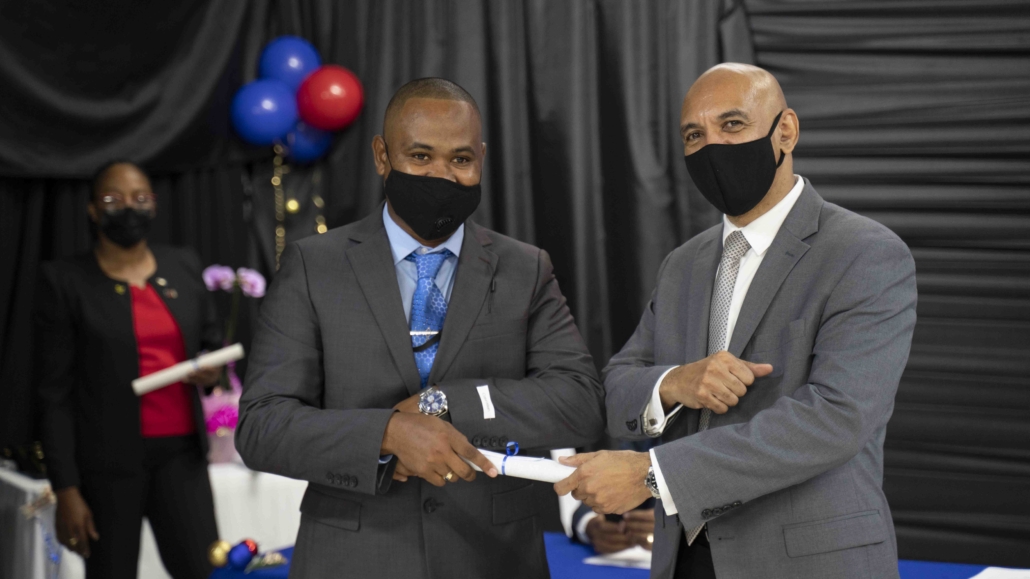 Meanwhile, Constable Lairie Lewis, a member of the hardworking SAC Operational Support Team (OST), was conferred with the award for being the officer who seized the most firearms so far this year. Constable Lewis was however quick to mention that his entire team contributed to this. He went on to say that since the special unit dubbed the SAC OST Overwatch Team was formed in August 2021, there has been at least thirteen firearms seized by that team. “The SAC OST Overwatch Team was specifically formed to target the disruption of gang activities, seize illegal guns and capture wanted men. There are seven of us on the team and I must say this award is dedicated to the entire team, but more so to our team lead – Sergeant David Williams. He ensures his team is motivated and focused on the tasks, and I have to big him up,” said Lewis. 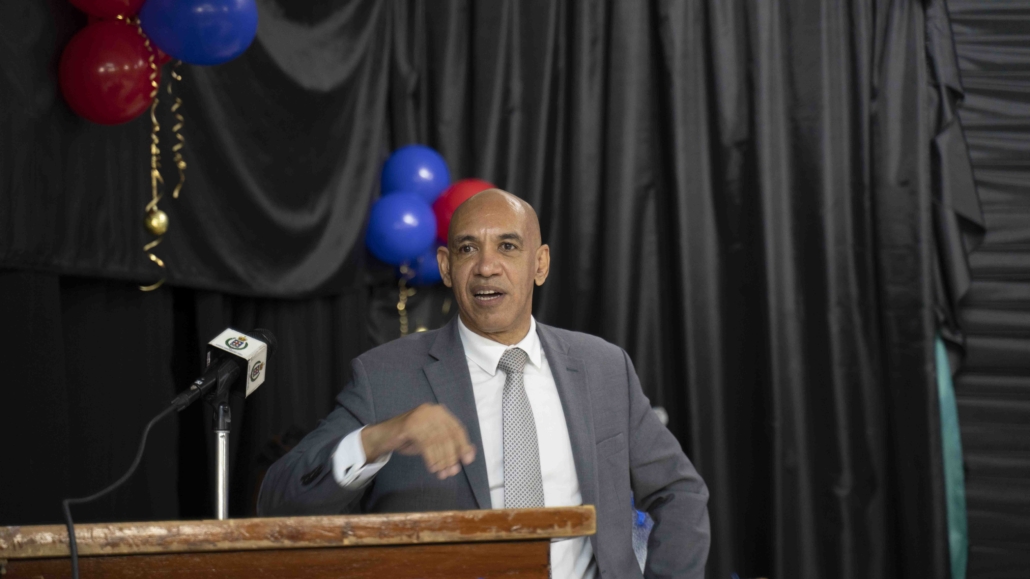 Commissioner of Police Antony Anderson, who was the guest speaker congratulated the awardees and encouraged them to motivate the others and share the success. “The collective success of the JCF is dependent on the individual success of each of you here today. Continue to be that Force for Good and deliver quality service to our citizens,” the commissioner urged.

Over forty SAC members and retirees were presented with awards for outstanding contributions to the division’s success within the last year.