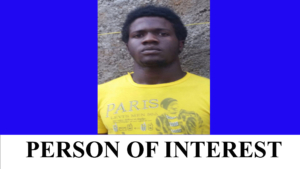 The murder of Keno Gonzales otherwise called ‘Indian’, committed on Monday, May 16, 2022 about 7:00 p.m. along a dirt track in Riverton City, Kingston 11.

The murder of Kwame Essuman otherwise called ‘Essu’, committed on Wednesday, May 18, 2022 about 7:45 p.m. on Ferguson Drive, Riverton City, Kingston 11.

On Wednesday, April 20, 2022 after witnesses failed to appear before the court; prosecutors entered a nolle prosequi in three other murder cases for which Syran Clarke was before the court. Since the release of Syron Clarke from custody there has been an upsurge in murders, shootings, and reports of extortion in and around the Riverton and Kingston 11 area.

Syron Clarke is being asked to turn himself in to the Hunts Bay Police by 12 midday on Friday, May 27, 2022 for questioning. The public is also being asked to assist with any information that can assist the police in locating Syron Clarke.