You are here: Home1 / Breaking News2 / Teacher Sentenced to Over 30 Years for Killing of 13-Year-Old Girl 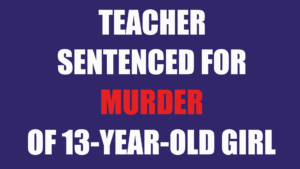 A Kingston teacher has been sentenced to more than 30 years in prison for the Sexual Assault and Murder of 13-year-old girl.

Sanju Maharaj, who was charged with the killing of 13-year-old Shanoya Wray, was sentenced today in the Home Circuit Court. Shanoya’s remains were discovered inside Maharaj’s bathtub on Walley Close, Kingston 6 on Friday, July 20, 2018. Maharaj had poured caustic soda and other chemicals on her body, causing it to deteriorate rapidly.

Maharaj plead guilty to and was sentenced as follows:

– Having Sexual Intercourse with a Person Under Sixteen (4 counts); sentenced to 12 years imprisonment.

-Trying to Dispose of a Corpse; sentence to 2 years in prison at hard labour.

The sentences are to run consecutively.

Another man, Leonardo Maddan, who was charged with Misprison of a Felony in relation to this incident is to reappear in court on October 28 this year.

Deputy Commissioner of Police in charge of Crime and Security, Fitz Bailey, is commending the detectives from the St. Andrew Central Criminal Investigations Branch for the quality of the investigation and diligence taken during the course of the probe.

Main Suspect in Killing of a Mother and her Four Children, Charged
Scroll to top