Main Suspect in Killing of a Mother and her Four Children, Charged

You are here: Home1 / Breaking News2 / Main Suspect in Killing of a Mother and her Four Children, Charged 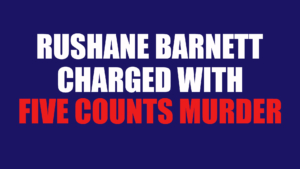 The main suspect in the killing of a mother and her four children in Cocoa Piece, Chapelton, Clarendon has been charged with five counts of Murder.

Charged is Rushane Barnett, 23, of Wilson’s Run, Trelawny and Papine in St. Andrew.

Barnett fled the area to Wilson Run in Trelawny, where he was apprehended.

He was charged based on a caution statement he gave to the police. Barnett’s court date is not yet finalised.

Follow JCF!
Teacher Sentenced to Over 30 Years for Killing of 13-Year-Old Girl