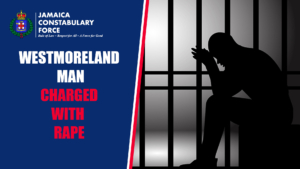 One man has been arrested and charged following an incident in Farm Pen District, Savanna-la-Mar, Westmoreland sometime in February 2022.

Reports are that Burke had an agreement with a female to have sexual intercourse at a cost. On his arrival at her home he refused to pay her, held her down and had sexual intercourse with her against her will. The woman made a report to the police.

On Sunday, September 4, 2022, a police operation was conducted at Burke’s home. He was pointed out by the woman to the police and was subsequently arrested and charged.