You are here: Home1 / Breaking News2 / Clarendon Man Charged with Abduction and Rape 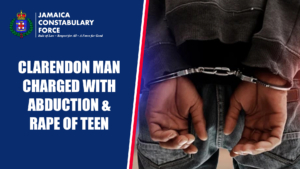 Eighteen-year-old Clifford Pratt of Seven Ground District, Clarendon was arrested and charged after he allegedly abducted and raped a 14-year-old girl in his community on Thursday, June 23.

He is awaiting a date in court to answer to charges of Rape, Forcible Abduction and Sexual Touching.

Reports from the Clarendon Police are that about 4:00 p.m., the teen was walking home from school, when Pratt held on to her. He dragged her to the back of a building, where he raped her. A report was made to the police and an investigation launched.

Pratt was arrested after he was pointed out to the police by the teen. He was subsequently charged.