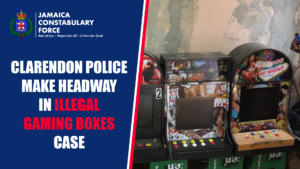 The Clarendon Police ramped up operations in the division this past week, targeting their focus on the illicit use and operation of poker game boxes. The theft of these game boxes has increased in recent times across Clarendon and the neighbouring parishes of Manchester and St. Elizabeth.

Throughout the week, several operations were carried out at various locations. Seventy-five game boxes were seized in a collaborative effort between the Police and the Betting Gaming and Lotteries  Commission. In one location, at Cemetery Road, Denbigh in Clarendon, 39 game boxes were seized. This led to the arrest and charge of a 60-year-old businessman, Daverton Francis. He is charged with Unlawful Possession of Property. 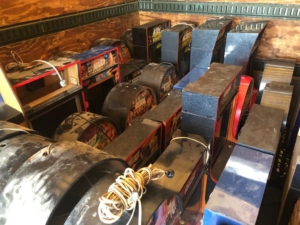 According to the head of Criminal Investigations for the Clarendon Division, Deputy Superintendent Jermaine Anglin and his proactive team,  investigations suggest that one of these boxes is valued at an average JM $350,000. When stolen, one is sold for a paltry JM $60,000 to the criminal underworld. He stated further that each box earns an average JM $6,000 daily and added that by his calculation, the 75 boxes seized could generate at least JM  $450,000 daily to fund criminal activities.

With this in mind, DSP Anglin and his team of detectives in Clarendon have vowed to stand resolute to remove the profit out of crime and bring perpetrators of this illicit activity to justice.

They are continuing to probe further, and operations will continue.

Man Charged for Firearm Seized in Clarendon
Scroll to top