Commissioner Reminds Officers to Protect Themselves

You are here: Home1 / Breaking News2 / Commissioner Reminds Officers to Protect Themselves 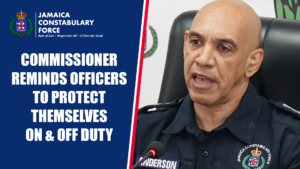 During his monthly press briefing, Commissioner of Police Major General Antony Anderson reminded members that they have the support of the high command in the lawful use of force to defend themselves and their colleagues against any attack.

He reported that since the start of this year, six policemen have been killed in the course of their duties and three members have been shot and seriously injured during confrontations with gunmen.

“I have often made the point that, when confronted by armed criminals, it is my desire for the police to win every single time and go home to their families,” Major General Anderson said.  He also added, “Unfortunately for us, Corporal Oliver Mullings was not able to go home to his family that night,” recalled Anderson.

He recounted that, “Just this morning a member was shot and injured by a gunman outside of the Kingston Central Police station while on traffic duty, thankfully he managed to take evasive action, return fire, and has been treated at hospital.”

Anderson once again reminded his officers to be aware of their surroundings on and off duty.

In encouraging lawmen and women Anderson added that, “There are many who have a lot to say about police use of force. The problem is that none of those people are out there on the front lines being shot at. It is far easier to opine about these things from positions of safety.