Elderly Man Killed, Nephew Named as a Person of Interest

You are here: Home1 / Breaking News2 / Elderly Man Killed, Nephew Named as a Person of Interest 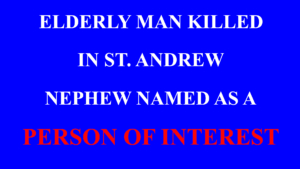 A male relative of an elderly man, whose dismembered, burnt remains were found in Cavaliers, Stony Hill, St. Andrew on Monday, June 06, has been named as a person of interest.

The dead man has been identified as 77-year-old Derrick Lindsay of Brooks Level Road, Stony Hill in the parish.

Mr. Lindsay’s nephew – Samuel Waldo – has been named by the Constant Spring Police as a Person of Interest.

Reports from the Stony Hill Police are that Mr. Lindsay was reported missing on Saturday, June 04 about 8:00 p.m. Investigations led to Mr. Waldo’s house where blood stains were found inside his home. The police and community members launched a search; Mr. Lindsay’s dismembered, burnt remains were found in bushes in the community about 11:00 a.m.

Anyone with information that can assist the police in their investigations is asked to contact the Constant Spring Criminal Investigations Branch (CIB) at 876-924-1421, police 119 emergency or the nearest police station.

Meanwhile, Samuel Waldo is urged to turn himself in to the police immediately as efforts to contact him have been futile.

Follow JCF!
Over 90 Pounds of Ganja Seized in Kingston