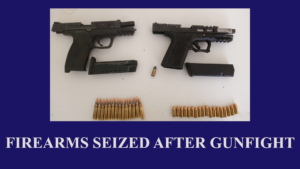 Lawmen assigned to the Savanna-la-Mar Police are investigating the circumstances surrounding the shooting death of one man and the injury of three others in Kings Valley in the parish on Tuesday, June 07.

All four injured men were taken to hospital where Sankey was pronounced dead and the other three men admitted in serious but stable condition.

Investigators have revealed that eighteen 9mm cartridges and fourteen 5.56 cartridges were found inSankey’s pocket. A Glock 9mm pistol was also taken from him.Lawmen also seized a 9mm pistol fitted with a magazine containing eleven 9mm rounds and an empty magazine in the vehicle in which Sankey was travelling.

Over 8 Million Stolen From Remittance Agency in St. Mary
Scroll to top