Over 90 Pounds of Ganja Seized in Kingston

You are here: Home1 / Breaking News2 / Over 90 Pounds of Ganja Seized in Kingston 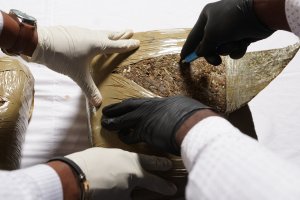 Two men have been arrested by the Marine Police after they were seen preparing marijuana for exportation near the Kingston Wharves in downtown, Kingston on Sunday, June 5.

The men were arrested on suspicion of:

Reports for that about 11:30 p.m., police were patrolling the area when the men were seen in a canoe. The vessel was searched which resulted in the following items seized.

Both men were taken into custody; however their identities are being withheld pending further investigations.

Elderly Man Killed, Nephew Named as a Person of Interest
Scroll to top