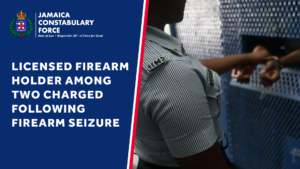 A license firearm holder is one of two men charged following the seizure of a firearm and ammunition at a party in Falmouth, Trelawny on Wednesday, October 26.

Reports from the Falmouth Police are that about 12:00 a.m., a team visited a party in session, when they saw a man with a bulge at his waist, who was acting in a manner that aroused the officers’ suspicion. He was accosted and one Tangfolio 9mm pistol with a magazine containing eleven 9mm cartridges taken from his waistband. Another man at the party approached the lawmen and identified himself as the owner of the firearm, and provided his license. Both men were subsequently arrested.

Their court date is being arranged.