You are here: Home1 / Breaking News2 / Fisherman Charged with Abduction and Attempted Rape 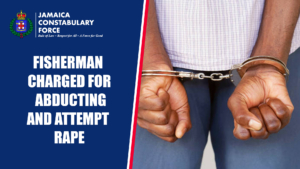 Detectives in Westmoreland on Wednesday, August 10, charged 42-year-old Patrick Bromfield, Fisherman of Top Road in Little London, Westmoreland with Forcible Abduction, Attempted Rape and Grievous Sexual Assault. The charges stem from an incident in which he allegedly abducted and attempted to rape a child in Broughton, Little London in the parish, in July of this year.

Reports are that about 8:00 p.m., Bromfield was asked to assist a child to the shop, on his motorcycle. He left with the child and took her into a lane where he fondled and attempted to rape her. The child managed to escape after the ordeal and a report was made to the police.

Bromfield surrendered to the police, in the presence of his attorney, and was subsequently charged.

His court date will be published as soon as it is made available.