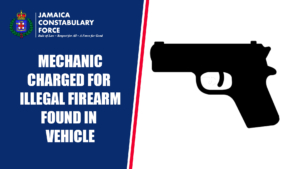 A mechanic has been charged in connection with an illegal firearm that was found inside a vehicle during a stop and search operation in Lizard Town, Spanish Town in St. Catherine on Wednesday, July 13.

Reports from the Spanish Town Police are that about 12:05 a.m., a team of officers on operation stopped a white Toyota Axio motorcar and conducted a search when one Glock pistol, fitted with a magazine containing eight (8) .40mm rounds, was found under the driver’s seat.

Murray was subsequently arrested and was charged following an interview.