Man Charged for Murder and Illegal Gun in Kingston

You are here: Home1 / Breaking News2 / Man Charged for Murder and Illegal Gun in Kingston 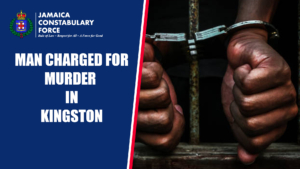 Investigators at the Central Police Station in Kingston have charged 26-year-old Andre Murray, otherwise called ‘Andrew Blacks’, of Regent Street, Kingston 4 with Murder and Illegal Possession of Firearm and Ammunition following an incident on Wild Street, Kingston 4 on Friday, June 24, 2022.

Murray was charged in connection with the murder of 37-year-old Ricardo Edwards, otherwise called ‘Tego’ of Wild Street in the parish.

Reports are that about 3:35 p.m., Edwards was in his yard when he was allegedly attacked and shot by Murray and another man. The police were summoned and on their arrival Edwards was taken to hospital where he was pronounced dead.

During an operation, Murray was subsequently arrested and charged on Thursday, June 30; his court date has not been finalised.

Lawmen continue their probe to apprehend the other individual involved in the incident.