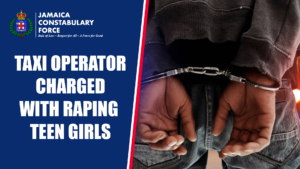 Police in St. Catherine are encouraging possible victims of rape to come forward and report the crime, following a taxi operator being charged with raping two 14-year-old girls on separate occasions.

Charged with Rape and Having Sexual Intercourse with a Person Under Sixteen Years is Kevon Chisholm, otherwise called ‘Khago’, of Young Street in Spanish Town, St. Catherine.

Reports are that between May and June 2022, Chisholm met the girls separately, on different occasions, and took them to a house on Welch Avenue in Gordon Pen, where he along with friends took turns and raped them.

A report was made to the police and Chisholm subsequently arrested. He was charged after being pointed out by the teens during an ID parade.

The Jamaica Constabulary Force (JCF) is reminding members of the public that sex crimes are serious offences and the JCF will leave no stone unturned in bringing perpetrators to justice.

Other females who may have been assaulted should contact the Spanish Town Centre for the Investigation of Sexual Offences and Child Abuse at 876-984-2305, police 119 emergency number or Crime Stop at 311.