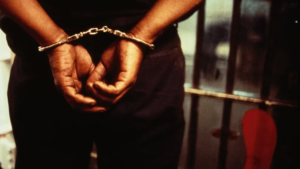 Three men who engaged the police in a shootout on Orange Street, downtown Kingston on Tuesday, June 07 have been charged. Three firearms and a quantity of ammunition were also seized.

Charged with Shooting with Intent, Illegal Possession of Firearm and Ammunition and Malicious Destruction of Property are;

Reports are that members of the Metro Quick Response Unit from the Public Safety and Traffic Enforcement Branch (PSTEB) was on patrol in the area when they responded to explosions heard. There was an exchange of gunfire during which, Black was injured. A taxi operator’s vehicle was also damaged during the gun battle.

All three men were arrested and the following taken from them:

They were charged following interviews in the presence of their attorneys. Their court date is being finalised.

Follow JCF!
Quick Action By The Police Lead to the Arrest of Suspect Hours After Murder