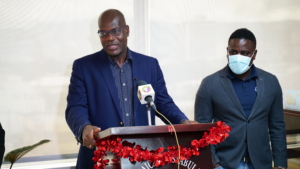 December 24, 2021– A multi-agency operation within the Jamaica Constabulary Force (JCF) has disrupted a plot to murder three persons and seized an assortment of guns, ammunition, and police paraphernalia. Seven persons were taken into custody in connection with seizures that took place on Thursday, December 23.

Reports are that about 9:00.a.m a C-TOC-led team conducted an operation during which the weapon and other paraphilia were seized. The plot to kill three females quickly unraveled when law enforcement organised the operation and made the arrest. The individuals that were arrested are being questioned with a view of proffering charges.

During a press conference held earlier today, Deputy Commissioner of Police (DCP) Fitz Bailey said, “The group that we have identified is involved in a series of murders, contract killings, and other matters that are under investigation.” He also added that their plans were foiled by the swift and technology-driven investigation that was conducted by the police.

“As we close this year, we want to assure the public that for 2022 we will be resolute, we will not relent, we are going to be more aggressive against those who continue to perpetrate violent crime,” DCP Fitz Bailey.

The coordinated operations were led by officers from the Counter-Terrorism and Organised Crime Branch (CTOC), the National Intelligence Bureau (NIB), and the Public Safety and Traffic Enforcement Branch (PSTEB).

Residents Diasarm Would-be Robber, Hand Him Over and Gun
Scroll to top