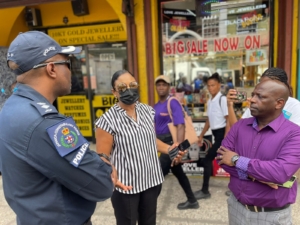 Scores of St. James business operators, civilians and taxi operators are expressing support for the public order restoration project currently under way in the parish. According to them, they have already seen a change in the city since the start of the Jamaica Constabulary Force (JCF) 14-day Public Order Reset Operation in Montego Bay, St. James.

Launched on Monday, August 15, the JCF-led initiative aims to curb the chronic disorder demonstrated by the general public.  Of note is the fact that an environment or disorder serves to facilitate various criminal activities within the tourism capital.

As the parish is known for its scenic beauty and exciting tourist attractions, stakeholders are lauding the efforts of the law enforcement community to maintain cleanliness and order.

Regional Director of the Jamaica Tourist Board, Odette Soberam-Dyer says “It’s a wonderful initiative by the police taking the lead on this. It was necessary as it is timely to restore public order not just in Montego bay, not just in the city but throughout Jamaica.”

Having seen the support for the police firsthand, Mrs Soberam-Dyer committed to pumping into the initiative, whatever support the JTB can garner.

Her positive sentiments were echoed by several citizens with whom we spoke. An employee of one local haberdashery, Joel Gibbon, expressed that before the operation, there were days they did not even have space to walk on the road. 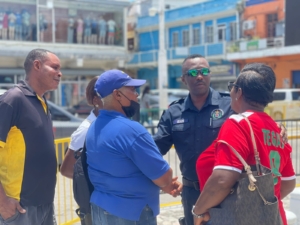 The operator of one popular Pharmacy, Mr. Rohan Perera insists that, “The operation is very effective. The street is clear, pedestrians get to move freely … there’s no build-up of traffic. I hope it continues because we’re seeing some progress with it.”

The JCF believes that by curbing petty crimes like illegal vending and taxi operating, theft and others, there will be a decrease in major crimes. 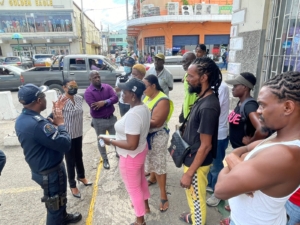 Commanding Officer for the St. James Division, Senior Superintendent of Police (SSP), Vernon Ellis, believe that in order for such an operation to be successful, it must be carried forward in the long term. “The reality is two weeks or three months won’t lead to that significant change, so we’re looking at sustaining the operation beyond 90 days.” 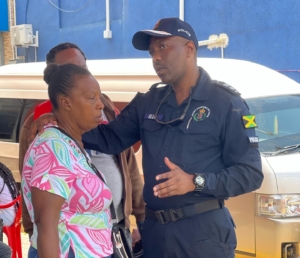 SSP Ellis says that part of the new protocols will see vendors wearing colour-coded markings to denote the vending zones to which they belong. “We’re getting support from TPDCo and some other agencies to regulate persons. We’re getting colour-coded bibs for them through these agencies, and alpha-numeric codes for their bibs and the lanes they will operate, so we’re getting the parish council to regularize persons.”

He also revealed that a multi-agency approach will be employed to ensure that the old negative practices do not re-emerge. “We’re also looking at how to – through the multi-agency approach – teach persons to self-regulate so we can scale down the number of officers we have to utilise. We’re bringing in some force multipliers like the surveillance units and police station for the township itself, so when those elements are put in place within the next 14 days we will see some significant transformation of the space.”