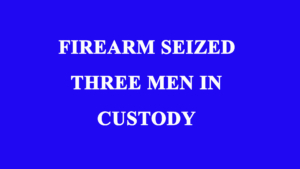 Reports are that about 12:30 p.m., the team was on enquiries in the area when a Toyota Axio motor car with the three men was intercepted. The vehicle was searched and the firearm and ammunition found beneath the driver’s seat. They were subsequently charged.