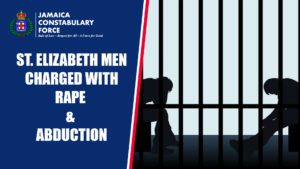 Two St. Elizabeth men have been arrested and charged for the Abduction and Rape of a teenage girl in Vineyard district, in the parish on Thursday, June 16.

Reports are that sometime after 1:00 p.m., the teen was chasing cows from her yard on to the main road when Miller, Lewis and another man approached her in a motorcar. Lewis allegedly exited the vehicle and forced her inside the car; the teen was taken to a house where she was sexually assaulted.

A report was made to the police and an investigation launched.

Both men were apprehended separately and later charged following interviews.

Their court date is being arranged.

Lawmen continue their investigations to apprehend the third man involved in the incident.