‘Understanding and Navigating the New Firearms (Prohibition, Restriction and Regulation) Act of 2022 – Investigative and Prosecutorial Approaches’ served as the theme for a two-day conference at the National Police College of Jamaica that ran from Thursday, December 1 to Friday, December 2.

A joint initiative of the College and other partners in the criminal justice system, the conference sought to ensure that the provisions of the new law are understood by local law enforcement personnel. Through the Caribbean Basin Security Initiative, the hybrid conference also saw the participation of regional law enforcement bodies.

Senior Superintendent of Police Stephanie Lindsay, who chaired Thursday’s opening ceremony, expressed in her greeting that dissecting the new legislation is timely. “It comes at a point where we see the impact of illegal firearms on our citizens in this country,” she said.

Director of Public Prosecutions Paula Llewelyn, also spoke at the opening ceremony. She said the new legislation now tackles the issue of trafficking firearms within Jamaica and encouraged investigators to be astute. 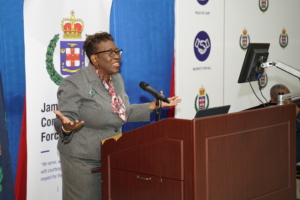 “At the heart of it as investigators, we have to use strategy and emotional intelligence in addition to being astute—all of which will be underpinned by your knowledge of the legislation,” she told the participants—who were drawn from various divisions withing the JCF.

The Honorable Marlene Malahoo Forte, minister of legal and constitutional affairs, explained to the hybrid audience that the new firearms law came after much work.

“The new legislation begins by speaking to the 85% of murders recorded yearly in Jamaica, [which are committed with a firearm],” she said, going on to explain that the data indicates that the proliferation of firearms in Jamaica is a direct catalyst for the high murder rate. She further stated that the data assessed indicated that most gun-related crimes are committed using illegal firearms. 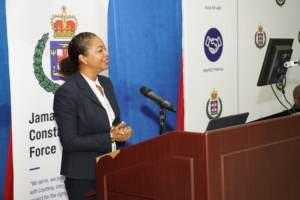 Throughout a series of presentations and workshops with question-and-answer sessions over the two-day period, participants delved into the section of the law that stipulates offences and penalties. At the end of the conference, all participants agreed that it was a success.

Sharing his experience, Sergeant Desmond Dawkins from the Public Safety & Traffic Enforcement Branch described it as eye-opening and interactive.

“Getting the opportunity to interact with persons from the legal profession, the judiciary and also other members of the force has helped me to figure out ways in which we can move from the old act into the new act seamlessly,” said Dawkins.

The conference was also praised by senior members of the JCF who were in attendance.

Deputy Commissioner of Police (DCP) Kevin Blake, in charge of Force Development and Logistics, said, “We’ve had a practical demonstration of how to utilize the legislation which is extremely important. Very rarely do we have new legislations and we have this type of introduction to the practitioners from all angles,” said DCP Blake.

Sharing the same sentiment, Assistant Commissioner of Police in charge of Area One, Clifford Chambers, highlighted that the conference is a step in the right direction as the Jamaica Constabulary Force aims to tackle the impact of guns, gunmen and gangs in Jamaica.

“The information provided is broken down for our investigators to assist in the transition from the old legislation to the new,” said Chambers. 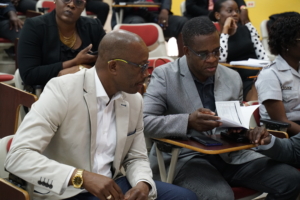 Superintendent Carl Berry, who heads the detective training school at the National Police College, said the conference was part of the JCF’s continued mission to keep the people of Jamaica safe by tackling organized crime. He gave the assurance that as the adjustment period unfolds over the next few months, the JCF will continue to partner with key stakeholders of the justice system, other agencies as well as citizens. 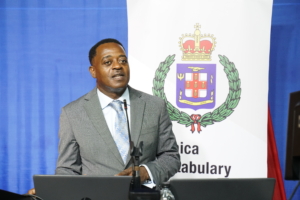