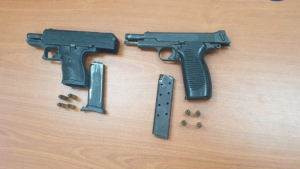 As lawmen continue their heightened operational activities across the island, the objectives are being met with the seizure of two illegal firearms and eight  rounds of ammunition earlier today, in the St. Andrew  South Division.  No one was arrested in connection with the seizure.

One  Luger Hi-point 9mm pistol and a Magmil 9mm pistol with eight rounds of ammunition were seized.

Reports are that about  12:30 p.m., a police team carried out operation at two permises on Hibiscus Drive in St. Andrew, one of which was abandoned.  The operation resulted in the seizure of the firearms and ammunition.

Meanwhile, the Police are renewing their appeal for members of the public to report illegal weapons by calling Crime Stop at 311 or King Fish at 811 or the nearest police station as they continue with the mandate to disrupt gangs, seize guns and arrest gunmen.