Wards of the State Rescued in St. James

You are here: Home1 / Breaking News2 / Wards of the State Rescued in St. James 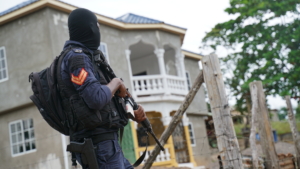 Two wards of the state were rescued in Retirement, Granville in St. James on Wednesday, February, 09.

Police resources were activated shortly after 9:00 p.m. when they received information from the Child Protection and Family Services Agency (CPFSA) that two wards of the state who had escaped from group home were at a location in St. James.

Intelligence was gathered and it led the operations team to a board shop in the community about 9:30 p.m., where the girls were found in the company of a male adult. The girls were taken into safe custody and will be placed before the Family Court.

The male was arrested and has since been charged with Harbouring a Child on A Fit Person Order. He is 39-year-old Prince McKenzie, a shopkeeper of Retirement, Granville in the parish.

Three Charged for Breaches of the Cybercrimes Act
Scroll to top